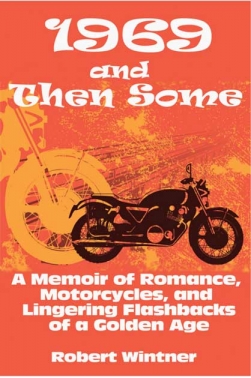 A Memoir of Romance, Motorcycles, and Lingering Flashbacks of a Golden Age
By Robert Wintner
Published by Skyhorse Publishing
Buy from:

The year when everything needed to be experienced and tried, when innocence was tempted, played, and lost.

1969 was that pivotal year for the baby boomers. Young and innocent, they were given the ultimate freedoms and were faced with growing up.

This touching, hilarious memoir is the true story of a late sixties grand tour of Europe—a life-defining parable, for those who remember and for those who can’t. Never before and not since have a handful of seasons so exquisitely defined the difference between right and wrong. With the gift of youth they saw, sensed, and savored the laughably clear distinction between profit motive and greed, between truth and propaganda, between national interest and defense contractors, between a lovely cloud of smoke and the smoke of napalm, and between the phantoms of security and the dangers of complacency and atrophy.

Stoned to the gills and then some, these adventurers saw and felt and knew things that no generation before did. Some fully engaged in the counterculture while others merely observed, sticking a left foot in, pulling a left foot out, but not quite jumping to the full hokeypokey.

It was an incredible time of self-discovery, of love, and of finding out what you were made of.

“Robert Wintner takes us on his journey first in the American Midwest as a college student, then on a sex and drugs, On the Road–style motorcycle trip across southern England, France, Spain, Italy, Israel, the Red Sea, Germany, and finally the Netherlands. . . . California, motorcycles, and women round out the life adventure. Facing old age and the inevitable progressing failures of the body, Wintner reflects on friends and experiences. In the end he realizes the only way forward is through acceptance of another motorcycle journey.” —Marnie Gaede, president of the Sea Shepherd Conservation Society US and the Fund for Wild Nature

“This touching, humorous memoir is the true story of a late ‘60s grand tour of Europe—a life-defining parable… an incredible time of self-discovery, of love, and of finding oneself.” —JointForcesJournal.com