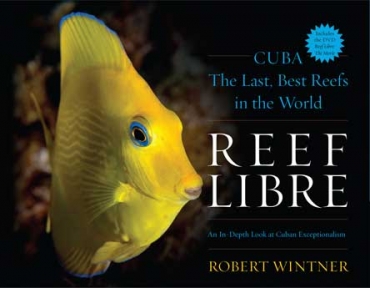 Decades of isolation from tourism and development have left Cuba’s coral reefs among the most pristine in the world, an “exceptionalism” that stands in stark contrast to the island nation’s poverty and political situation. Famed diver/photographer Robert “Snorkel Bob” Wintner showcases these magnificent reefs with his astounding underwater images, while also capturing terrestrial life in the cities and villages of the island nation.

Reef Libre is not a travelogue, but asks the big questions after a lifetime of isolation—can Cuba’s reefs still thrive? Nearly 400 stills, a compelling narrative, and a DVD capture this delicate time in reef history. Reef Libre: The Movie is a mini-documentary which encompasses this pivotal moment—from the streets to the reefs.

This blog-style book offers personal impressions of a dive tour in Cuba and is richly illustrated with photographs by the author. The Cuban government has restricted diving and fishing to preserve its reefs and associated ocean creatures. The author states that the impoverished, isolated dictatorship is doing this more successfully than its democratic nemesis, the United States. Wintner praises his hosts yet feels more could be done to mitigate damage from tourism. The reopening of diplomatic relations with Cuba makes this book timely—the move may mark the return of mass tourism from the United States. While recounting his Cuban tour, Wintner makes important points about reef degradations, large-scale fish capture for aquariums, and efforts at protection of sea life. He repeatedly compares the dire situation in Hawaii with unspoiled and regulated conditions in Cuba. Verdict: . . . [Readers] will appreciate his experiences, as well as undersea images and witty captions. (Library Journal)

Wintner . . . takes readers on a tour of Cuba’s thriving coral reefs through gorgeous photos and an accompanying mini-documentary DVD. The stunning photos depict wildlife among the reefs including moray eels, puffers, the 'endearing' spotted drumfish, and indispensable sharks. These are intermixed with images of Cuban architecture, folk art, and ubiquitous vintage cars. A trip to rural Jucaro features propaganda billboards alongside horse-and-buggies. Wintner weaves in the narrative of his visit to Cuba while outlining reef conservation efforts, including the banning of spearguns and nets for fishing, protection of the shark population, and emphasis on organic farming. In contrast, he discusses the decline of reefs in his home state of Hawaii, brought on by the aquarium trade, corrupt politicians, and a destructive 'shark eradication program.' There are plenty of tips on cuisine, hotels and scuba locations to hit . . . but the vibrant photography is the star of this show. (Publishers Weekly)

Featuring striking, full-color nature photography throughout, Reef Libre: The Last, Best Reefs in the World is a coffee-table book showcasing the breathtaking beauty of Cuba's reefs and aquatic wildlife. The only known reef system in the world with 100% biodiversity, 100% coral cover, and a complete host of apex predators, will Cuba's continue to thrive? The lack of U.S. tourism and marginal development have left them pristine, but for how long? A DVD accompanies this stunning showcase postulating serious ecological and moral conundrums. Reef Libre is a treasury for environmental studies shelves and especially recommended for public library collections. (Library Bookwatch)

Reef Libre: An In Depth Look at Cuban Exceptionalism presents a fine look at Cuba's coral reefs, which are, surprisingly, among the most pristine in the world primarily because of isolation from tourism and development - the very things Cuba has been fighting to gain. Diver/photographer Robert Wintner uses his images and natural history to showcase these reefs and their exceptional unique qualities, contrasting their beauty with Cuba's urban and more developed areas. It's a gorgeous coverage that is unique in its focus on an equally exceptional reef that is one of the few remaining relatively undisturbed reefs in the world today, and is a 'must' for any collection strong in marine ecology. (Midwest Book Review)