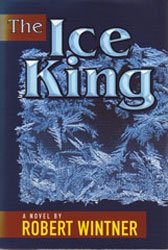 A Novel
By Robert Wintner
Published by Miles River Pr
Buy from:

Robert Wintner, in a narrative voice at once powerful and lyrical, passionate and graceful, creates The Ice King as a steadfast and comforting presence in the life of a man whose childhood was forever altered by his father’s death and his own subsequent loss of place. Torn from the forests and lakes of rural Indiana, he is thrust into the split-level reality of suburban St. Louis. The Ice King is magic, and so is this story.   —Diane Donovan, The Book Watch

The Ice King reveals that sometimes it takes blood, sweat and tears to gain a sense of self. The story ends optimistically; the adolescent comes to accept and appreciate the spirit his father imbued in him. This poignant tale with a cutting edge shows how walking through one’s worst fears can lead to deeper self-understanding. By the time I finished reading The Ice King I felt moved by the gripping realism and inspired by the protagonist’s spirit of survival.
—Peter Robinson, The Commuter Times of San Francisco

Wintner fleshes out The Ice King with humor, warmth and insight. We have one warning: Don’t read The Ice King in a hushed library—we tried, until waves of laughter rolled up and exploded… Wintner is hilarious, but underneath the hilarity, he serves the message. —The Indianapolis News

Wintner offers remarkably strong characters and developments…with broad stretches of gourmet reading. The narrator’s sharp, laconic wit, the fine portraits of the skewed family and in-laws, the fluid slaloming from past to present, and the occasional nugget of contemplative hindsight that rings like a solid brass bell are some of the author’s considerable strengths. Wintner has an obvious and large talent for storytelling and characterization. —Rappaport Magazine