Hawaii is the only state in the U.S. to allow aquarium extraction with no limits. The United Nations‘ Convention of International Trade in Endangered Species (CITES) and its 175 member countries recognize the international wildlife trade as an ecological and economic problem causing large scale loss and damage. Hawaii Governor David Ige can sign SB 1240 into law, keeping Hawaii reef wildlife on home reefs instead of shipping it out to tanks across the U.S., Europe and Asia (China is the fastest growing market for Hawaii reef wildlife). Or not.

Ending aquarium permit issuance will not guarantee survival for Hawaii reefs. Our reefs face many challenges, but Governor 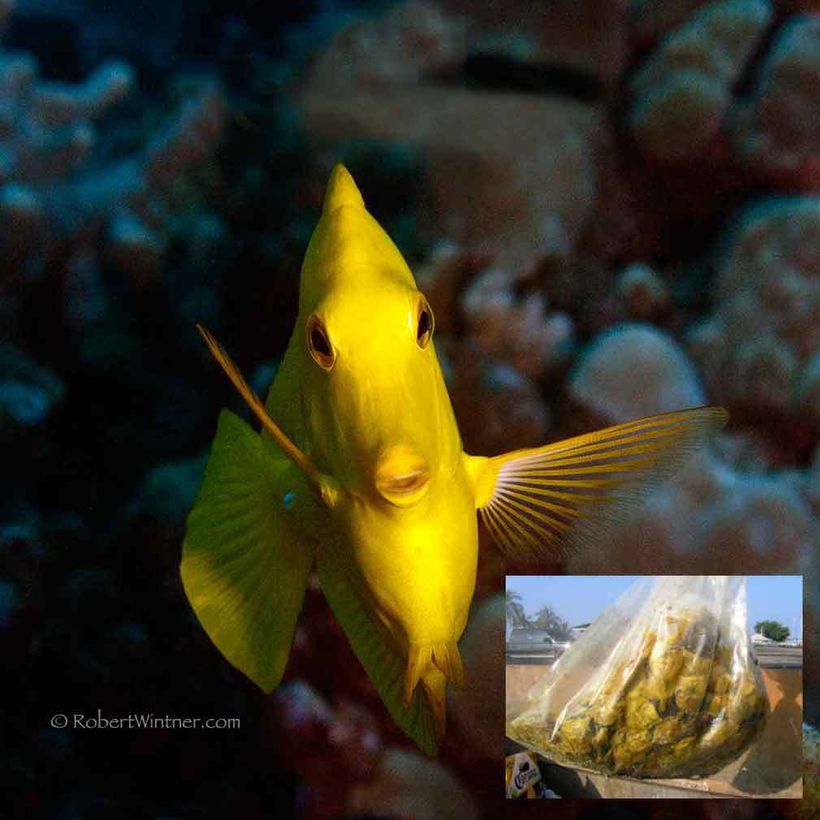 Ige can eliminate one serious, entirely unnecessary and immoral threat. Hawaii is so small and fragile that it deserves protection. We have a chance here to recognize Hawaiian cultural heritage and put public trust before selfish commercial objectives.

The Hawaii State legislature has addressed this issue frequently over the last fifty years, but special interests delayed or derailed efforts every time—until now. In 1973 our reefs were in good shape, and a ban on aquarium extraction nearly went into effect, until political pressure got the acting governor to lift the ban a few days before it could begin. Talk has gone on and on, while our reefs decline. The Hawaii Dept of Land & Natural Resources (DLNR) must protect natural resources by law has been captured by the aquarium trade, using reported catch data to justify an undefined concept of “sustainable.” It’s a lie. Actual catch is two to five times reported catch. That’s two to ten million reef critters each year taken from Hawaii reefs to feed the aquarium trade.

28 million reef critters are in the aquarium pipeline at all times. 99% perish within a year of capture. THAT is what the aquarium trade calls “sustainable.” It’s a bottom line revenue assessment. DLNR says it has no data to support SB 1240, even as DLNR fought tooth ‘n nail against environmental assessment all the way to the Hawaii Supreme Court. We await that decision. Will the Ige administration defy the Judicial Branch as well in defense of this despicable trafficking in reef wildlife?

Hawaii people and the public trust should come first. SB1240 will end aquarium permitting in Hawaii and require DLNR to define “sustainability” with catch limits on the forty most targeted species. Pono politics recognizes the difference between right and wrong; so we encourage Governor Ige to lead with a signature and put Hawaii’s people and public reef trust above aquarium trade lobbyists. We encourage him to override the Conflict of Interst at DLNR. Stopping aquarium permits in Hawaii is both economic and morally beneficial. 175 nations have ended live export for the pet trade. Hawaii promotes aloha and beauty as aquarium extraction renders us hypocritical and foolish. Enough. The future is now for these islands in the blue and this Blue Island Earth. (Thank you, Nainoa Thompson.)

Where is the data on wild animals caught for the pet trade? That always ends badly—from alligators in New York sewers to Burmese pythons engorging South Florida. Lionfish in the Atlantic and Caribbean now outnumber all other species. How did they get there? They didn’t swim there. Where is the data on that? Some are Hawaii lionfish. Where is the science allowing Hawaii to ship wildlife indiscriminately, to become mortally invasive in far away places? Is that Aloha? Give reefs a chance.

I met with Governor Ige on this issue and gave him the DLNR Policy edict prioritizing conservation and the public trust in all resource management, with commercial extraction allowed only in the absence of impact or impingement on that resource. He scanned the policy edict and asked his associate: “Did you know about this?”

Apparently the governor did not know. But he knows now.

Interested parties can email David Ige at gov@gov.state.hi.us or go to the website governor.hawaii.gov The website message box allows 250 characters but the link below can attach a file with a longer message. Or call: (808) 586-0034